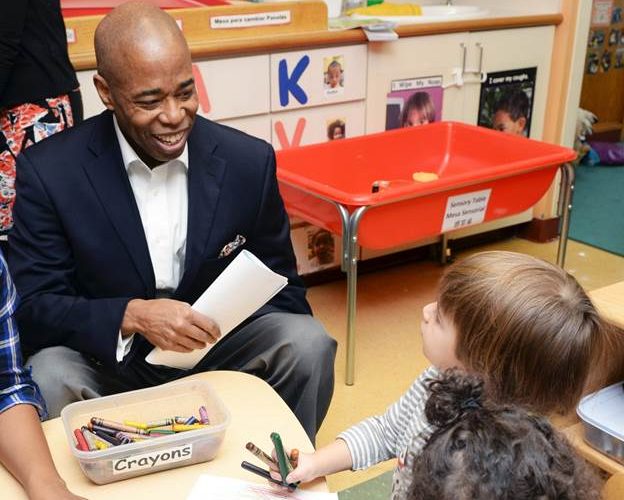 BROOKLYN, NY, April 17, 2017: Today, it was announced that all five borough presidents have partnered on a letter to Mayor Bill de Blasio calling for the full funding of universal free healthy school lunch for every New York City district school student for Fiscal Year 2018 (FY18). This is the first time that the elected leaders of all of the city’s boroughs have come together to make this budgetary request. A number of major American cities successfully offer universal free school lunch, including Boston, Massachusetts; Chicago, Illinois; Dallas, Texas; Detroit, Michigan, and Philadelphia, Pennsylvania. In New York State, the program is offered in Buffalo, Hempstead, Poughkeepsie, Rochester, and Syracuse. The borough presidents urged Mayor de Blasio to add New York City to the ranks of these metropolises.

“There are few, if any, line items in the budget that can do so much for so many at such a small cost,” states the letter, which can be read in full here. “As elected officials, we continually discuss the problems of hunger, bullying, and the economic challenges facing families every day. Universal free school lunch cannot, by itself, solve these issues, but it can have a significant impact on all of them immediately. That fact alone should make this program a priority for any government.”

Universal free school lunch currently exists in nearly 35 percent of New York City’s public schools. The borough presidents noted that those schools have seen an increased participation rate across all grade levels, including a 15 percent difference in high school, 20 percent difference in middle schools, and 10 percent difference in elementary schools. They additionally highlighted the “immeasurably positive impact” that the program’s expansion would have due to the reduction in stigma for students facing hunger, as well as the role a healthy, nutritious school lunch plays in academic performance, student health, and lifestyle beyond the school cafeteria.

“Quality nutrition is foundational to academic achievement, which is why our desire to raise our city’s education standards must be coupled with a commitment to meeting the needs of students combating hunger,” said Brooklyn Borough President Eric L. Adams. “The time has come for universal school lunch in New York City.”

“When students eat, what they eat, and whether they eat at all are each crucial factors with a real effect on whether they’re equipped to learn,” said Manhattan Borough President Gale A. Brewer. “Universal free school lunch will eliminate a source of stigma in our schools, help eliminate achievement gaps, and make school food programs more effective. Let’s get this done and do right by our kids.”

“A well-fed student is going to have a better school experience,” said Bronx Borough President Ruben Diaz Jr. “For a relatively small amount of funding we can ensure that all school children have a nutritious, healthy lunch, and are therefore prepared for the school learning environment. I am proud to partner with my colleagues on this effort to both fight hunger and reduce the stigma of those students who already receive a free lunch, while also fueling our students for the school day.”

“We can ensure a nutritious meal for all 1.1 million NYC schoolkids and reduce the stigma for students facing hunger, all at a minimal cost to the city,” said Queens Borough President Melinda Katz. “Universal school lunch is the right thing to do and it’s what our children deserve.”

“The school lunch program makes sense for Staten island for two important reasons: Staten Island parents already carry the brunt of out-of-pocket costs for school lunches across the city since Staten Island has the lowest percentage of free lunch eligible students,” said Staten Island Borough President James Oddo. “Furthermore, my director of education, Rose Kerr, a former principal, has advised me that the current process, which forces schools to use staff time accounting for and collecting funds from families, is time better used elsewhere for students.”

Federal and state reimbursements cover 92 percent of the total universal free school lunch costs. Because of this, the borough presidents noted that City costs for the program would be a “miniscule fraction of the New York City Department of Education (DOE)’s budget.”

Next PostLawmakers Move to Save NYC Youth by 'Raising the Age'