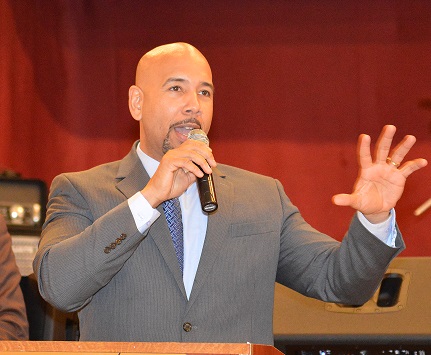 New York State was ranked nearly dead last at 49th among the 50 states and Washington, D.C. for civic engagement and volunteering in 2015 by the Corporation for National & Community Service, an independent federal agency. New York City has reported recent voter turnout rates as low as eight percent.

Borough President Diaz stressed the importance of year-round civic engagement and notes that it isn’t solely about politics, though experts indicate that civically engaged individuals do vote in higher numbers.

“Civic engagement comes in many forms,” said Borough President Diaz. “It’s attending your community board meeting, getting involved with an association, volunteering with a nonprofit, attending a conference or seminar to learn about policies that impact you and more. Civic engagement is about being an informed and active citizen who works to shape a neighborhood, borough and city you’re proud of.”

Research indicates that lack of accessibility is the primary barrier to civic engagement – New Yorkers can’t easily find engaging, action-oriented civic, community, and political events. The offerings of New York City’s nearly 100,000 community, nonprofit and government organizations are scattered across thousands of websites, newsletters, and social media accounts – leaving New Yorkers struggling to find and keep track of it all.

“New York City is the Capital of Choice,” said OrangeU Going, Inc. Founder Samantha Diliberti. “New Yorkers have dozens of websites to organize all of our choices – from restaurants to Broadway shows and everything in between. What we didn’t have was a central platform to organize all the civic engagement opportunities being offered. OrangeU Going fills that gap and serves everyone – from the civic novice to policy wonk.”

OrangeU Going is a tool designed to make it easy for New Yorkers, organizations, and elected officials to connect and affect change. New Yorkers can stay informed, know what’s happening in their communities, and find civic, political, and community events related to issues they care about. Organizations can use the platform to easily reach New Yorkers.

“This year is going to be a very exciting and active time in New York,” said Borough President Diaz. “The New Year is the perfect time to stress the importance of civic duty and encourage New Yorkers to commit to making civic engagement a priority in their lives. I call on all Bronxites – residents, organizations, and elected officials – to accept the Hour New York Challenge and show how strong our community really is. But I don’t just call The Bronx my home, I call New York City my home – which is why I’m encouraging my fellow boroughs to take on the Hour New York Challenge as well.”

Residents across New York City are encourage to join the Hour New York Challenge and pledge to dedicate at least one hour each month to being civically engaged in their community or in an issue they care about. Organizations can post events to the site for free through March and can participate as Hour New York Partners.

To do your part, visit OrangeUGoing.com to take the pledge and learn more. In addition, those taking part in the challenge are encouraged to use hashtags #HourNewYork and #OUGBronx to share their participation on social media.

“The Hour New York Challenge is designed to show New Yorkers just how easy and rewarding it is to get involved,” said Diliberti. “Simply take the pledge and use OrangeUGoing.com to find civic, political, and community events and happenings you’re interested in attending.”

Diliberti notes that if even one quarter of the city’s five million registered voters were to take the pledge and dedicate one hour a month, they would cumulatively commit over 142 years of time to issues they care about – every month. That’s the power of 1.25 million people dedicating one hour to bettering their communities by attending a block association meeting, a forum on education, housing, or the environment, or even a fundraiser supporting a cause dear to them.

“That’s the power of an hour,” said Diliberti.

OrangeU Going, LLC was founded by Samantha Diliberti, who has built her career in and around government over the past decade, with a mission to empower New Yorkers with the information, resources and tools they need to affect change. OrangeUGoing.com is a civic engagement platform designed as a tool to easily allow residents, organizations, and elected officials to connect. Visit www.OrangeUGoing.com to find civic, political and community events in government, nonprofit, business, media, and labor, all on one site.