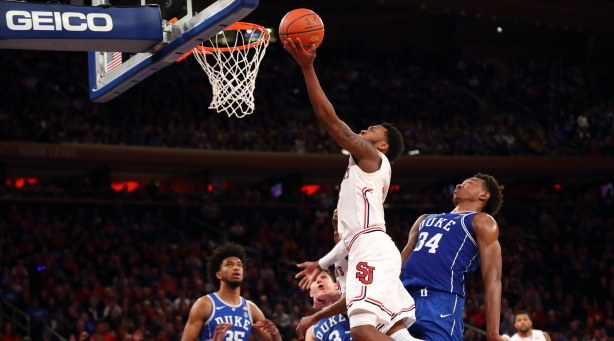 NEW YORK – Led by a performance from Shamorie Ponds that will go down as one of the best in the long and storied history of St. John’s Basketball, the Red Storm topped the No. 4/5 Blue Devils, 81-77, at Madison Square Garden.

The Brooklyn native tallied 33 points, his second-straight 30-point effort and his fifth overall of the season, to lead the Johnnies to their first win over a top-five opponent since 2011. Ponds also tallied seven rebounds, four steals, and three assists on the afternoon. In a second half that saw the Red Storm erase a seven-point halftime deficit and climb ahead by as many as 11, Ponds recorded 24 points, five rebounds and a pair of assists in the stanza.

Bashir Ahmed scored 13 of his 19 points in the second half, making four of his six attempts from the floor in the latter stanza, including a 2-for-3 showing from three-point range. The senior from the Bronx also sank all three of his free throws attempts in the final 20 minutes.

Tariq Owens poured in 17 points on 7-of-13 shooting. The redshirt junior made three free throws in the final 32 seconds, including the tally that pushed it to a two-possession game with just three ticks left on the clock.

The Red Storm’s win marked the best for the program in terms of national rankings since Feb. 19, 2011, when the Johnnies knocked off No. 4/4 Pittsburgh at Madison Square Garden. That season, the Johnnies also beat No. 3/3 Duke at “The World’s Most Famous Arena.”

The patrons at Madison Square Garden were treated to some offensive fireworks in the early going, as St. John’s made six of its first eight field goal tries to take a 14-13 lead five and a half minutes gone in the contest.

Trailing by three, 23-20, following a Ponds layup near the midway mark of the period, St. John’s saw Duke score seven of the game’s next 10 points to open a seven-point lead following a Grayson Allen free throw just over three minutes later.

The Blue Devils bumped their advantage to as many as 10 in the closing minutes of the opening half, but the Johnnies held Duke scoreless for 2:43 down the stretch, clawing within five before a Marques Bolden put-back jam extended the deficit back to seven, 39-32, at the break.

After starting 7-of-10 from the floor, the Red Storm made just seven of its next 18 attempts, but still managed to close out the half shooting 50 percent from the floor (14-of-28).

Out of the break, Simon knocked down a jumper and Ponds drilled a triple, bringing the Johnnies within a pair, 39-37, 1:15 into the period. After a Marvin Bagley III tip-in, the Johnnies responded with the game’s next seven points, extending their run to 12-2 and moving the Red Storm ahead by three, 44-41, less than four minutes into the period.

The Red Storm continued to apply pressure over the next few minutes, as Ahmed knocked down a corner three and converted on an old-fashioned three-point play to put the Johnnies ahead by seven, 52-45, with 14:12 to play.

Duke responded with five-straight points to shrink the St. John’s advantage to a pair, 52-50, but the Red Storm locked down defensively, holding the Blue Devils without a point for the next 3:56 and moving ahead by nine.

While the Blue Devils continued their hot shooting hand over the next few minutes, the Johnnies went cold. Led by nine points from Trevon Duval, Duke unleashed a 16-4 run to regain the lead, 73-72, on a pair of Trent free throws with 1:34 to go.

With his team facing its first deficit in more than 15 minutes, Ponds took the ball on the ensuing possession near midcourt before driving down the left side of the paint and laying it off glass to put the Johnnies back ahead by one, 74-73, with 1:17 to go.

After an 0-for-2 trip to the free throw line from Duval on the ensuing offensive possession, St. John’s regained control with just over a minute to go. Following a Wendell Carter Jr. block on Owens, the Johnnies needed to inbound underneath the basket with five seconds remaining on the shot clock. Ponds worked his way free and caught the pass on the near wing, launching a closely contested three that found the bottom of the net and put the Johnnies ahead by four, 77-73, with 38 seconds to go.

Just three seconds later, Allen, Duke’s lone senior, answered with a triple for the Blue Devils, cutting the deficit back to one.

On the ensuing St. John’s possession, Duval fouled Owens with 32 seconds to go and the 6-foot-11 forward made both of his tries from the charity stripe, bumping the lead back to three, 79-76.

Bagley and Ponds traded one free throw apiece on their teams’ next possessions, giving St. John’s a three-point lead with 18 seconds to play. Allen looked to play hero for Duke on its final possession, but his three-point attempt clanked off the iron with five seconds to go. Owens came down with the board before making one of his two free throw chances on the other end to seal the decision.

St. John’s returns to action on Wednesday, traveling to face No. 1/1 Villanova at The Wells Fargo Center.