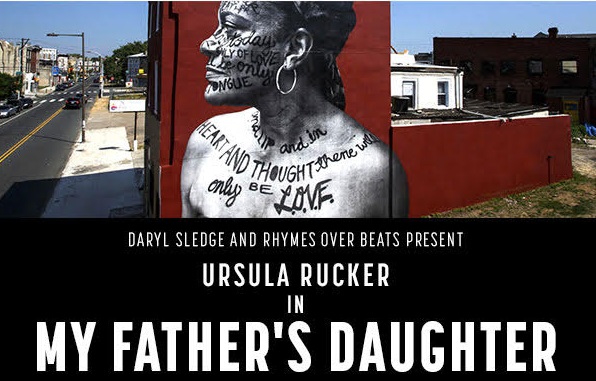 WRITTEN AND PERFORMED BY URSULA RUCKER

My Father’s Daughter written and performed by the dynamic, truth-telling, spoken word poet and recording artist, Ursula Rucker will begin performances on October 10, 2017, for a limited engagement through October 15, 2017, at Summer Shares at La MaMa*, located at 66 East 4th Street, between Bowery and 2nd Ave in New York, NY.

Inspired by her mother’s life, My Father’s Daughter tells the story of both mother and daughter, as Ursula states “Her life informs mine and still does; her wild, crazy life, most people would not survive.  I survived it with her, and dealt with a lot of pain and had to navigate through my life with that history”.   It’s a story of survival, forgiveness and healing told through poetry and song. The performance – raw and rifting, will have audiences laughing and crying all at the same time.

Ursula Rucker, a Philadelphia born poet, mother activist and recording artist has been performing and recording for over 17 years and has released five solo albums (Supa Sista, Silver or Lead, ma’at mama, Ruckus Soundsysdom and SHE SAID) as well as collaborated on over 50 songs, in a wide array of musical genres, with producers/artists from around the world (such as King Britt, Bahamadia, The Roots, 4 Hero, Jazzanova, Louis Vega, Incognito and others). Ursula was awarded both the Leeway Foundation’s Art for Change & Transformation Awards. She is the feature of a documentary short called POET and completed her first book, Drown the Devil…a collaborative project of poems and photos dedicated to New Orleans with Pulitzer Prize winning photojournalist, Clarence Williams.

A graduate from Temple University, Ursula launched her career during an open mic night at Center City’s club Zanzibar Blue. Rucker was a part of the hip crowd of eclectic talent and friends that flocked to King Britt and Dozia Blakey’s Back to Basics weekly dance party at Silk City.  Performers like The Roots, Erykah Badu, Jill Scott and DJ Jazzy Jeff performed, as did Rucker, refining their craft and making connections. Those connections led Ursula to record the poem “The Unlocking” on Questlove, of the Roots first album Do You Want More?!!!??!!

A fearless warrior, and unafraid to be unguarded and point the way out of hardship into better times, Ursula’s gift in spoken word is using her words to project wisdom, fury, pain and female strength all coming from the depths of her heart and soul, which is what makes her delivery so effective.

To learn more about Ursula Rucker and the play visit www.RhymesOverBeats.org

The Founder and Artistic director of the Rhythm One Company, whose focus is training, artistic development, new work and new artists. Mr. Jones has been a writer, director, and teacher of stage and film, a composer, and performer throughout the United States and Europe since 1992.

Mr. Jones’ most recent credits include, Wrote opera libretto called Gwine Dig a Hole 2017. Directed Black Nativity by Langston Hughes at Theater Horizon, which secured 8 Barrymore nominations for 2016 Barrymore awards winning for best ensemble in a musical, best musical direction, and best choreography. Directed and wrote South African Nativity performed in Enon in Cape Town South Africa 2015, directed breaking barriers 2015 for First Person Arts at the Philadelphia Theater Company, directed Othello 2015 for Theater in the X, 2014 nominee for The Pew award for excellence in the arts. Wrote and performed the song, “Coochie Time,” featured in Spike Lee’s film, Da Sweet Blood of Jesus. Mr. Jones has most recently directed Arthur Miller’s Death of a Salesman, The Meeting by Jeff Stetson, Beauty and the Beast, 12 Angry Men, The Last Jimmy (with Dice Raw of The Roots) at Prince Theater and has directed various productions at the Los Angeles Convention Center, Freedom Theater and the Kimmel Center.

A Film, Television and Theater Producer. He has worked on over 100 film and television projects and was responsible for initially bringing Rain Pryor to NYC, where he produced her hit Off Broadway One Woman Show FRIED CHICKEN AND LATKES. The production matriculated the Off Broadway circuit for a year, and performed in sold out venues in Woodstock, NY, Washington, DC and Winston Salem, North Carolina.  Mr. Sledge is the Producer of the SAATCHI & SAATCHI award winning documentary THAT DAUGHTER’S CRAZY, which has premiered in San Francisco, Chicago, Atlanta, NYC, Philadelphia, and many other U.S. Cities. The documentary made its European Premiere in London, England in 2015.  Daryl is the Producer of the film 2nd Life, written and directed by Jake Alexander McAfee, and features the actor Doug E Doug. The film was awarded HBO BEST SHORT FILM in 2015 and has toured the festival circuit. Daryl is a producing member of the Theatre Collective Rhymes Over Beats, founded by Producer and colleague Patrick Blake. It is dedicated to bringing Hip Hop themed plays to the commercial theatre.

A producer/playwright, he is the Founding Artistic Director of Rhymes Over Beats a collective of hip hop and theater artists, whose mission is to develop work, influenced by the hip hop aesthetic, that tell seldom told stories of the community and whose latest production was The Assignment.  As an  independent producer he has produced: The Exonerated, In the Continuum, Play Dead, The Soap Myth, 39 Steps(revival) and Bedlam’s St. Joan/Hamlet, as well as numerous others.  As a playwright he has contributed to short play festivals at South Street Seaport, The Players Club, New York Performance Works, and The Scheherazade Festival in San Francisco.

For interviews or more information, contact Cherine Anderson at – cepanderson@yahoo.com