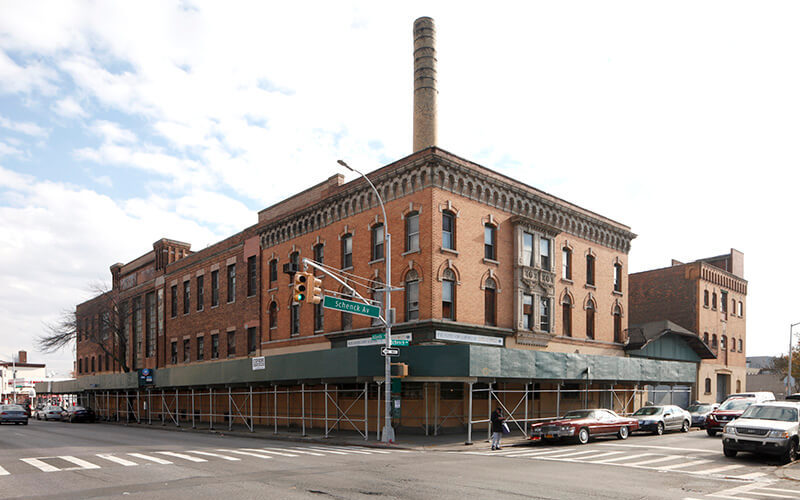 This week the New York City Landmarks Preservation Commission (LPC) designated as an individual landmark the Empire State Dairy Company Building and Complex at 2840 Atlantic Avenue in Brooklyn. Built between 1906 and 1915, these industrial buildings, which take up a full block of Atlantic Avenue between Schenck and Barbey Streets, represent the history of the neighborhood and the milk industry.

The Empire State Dairy Company, founded in 1869, began construction on this site in 1905, when technological advancements were being made to improve the safety and quality of milk, and the company was expanding its business.   The complex, which was completed in 1915, was constructed in two stages. The first two buildings, which were constructed in 1906-1907 and designed by prominent Brooklyn architect Theobald Engelhardt, are Renaissance and Romanesque Revival style buildings with unique terra-cotta details. The complex was expanded in 1914 when milk started to be processed in high volumes and the company needed larger, more modern facilities. The annex, which included four additional buildings constructed in 1914-1915, was designed by Otto Strack in the Viennese Secessionist style. Strack created a centerpiece for the complex, a slightly taller building that included two large panels with intricate polychrome ceramic tile mosaics depicting Swiss pastoral folk scenes with cows. They are considered to be one of the largest, surviving intact decorative tile installations from the American Encaustic Tile Company. While constructed as separate buildings, their Atlantic Avenue facades read as a unified, almost symmetrical composition.

In 1924, the Empire State Dairy Company was acquired by the Borden Company in a transaction that included the East New York complex, which continued to process milk until its closure in the early 1980s. The Empire State Dairy buildings are distinguished remnants of both a once-bustling dairying complex and a vanished era. Dating from the period in which New York City’s milk was renowned for its outstanding quality following decades of innovation and reform, they are also reminders of the city’s signature role in improving milk’s safety and quality, and in making fresh cow’s milk a major part of the American diet.

“The designation of the Empire State Dairy marks an important chapter for our community and we celebrate it as one of the many symbols of East New York’s rich history and a turning point where East New York’s beauty will no longer go unrecognized,” said Zulmilena Then, Founder of Preserving East New York.