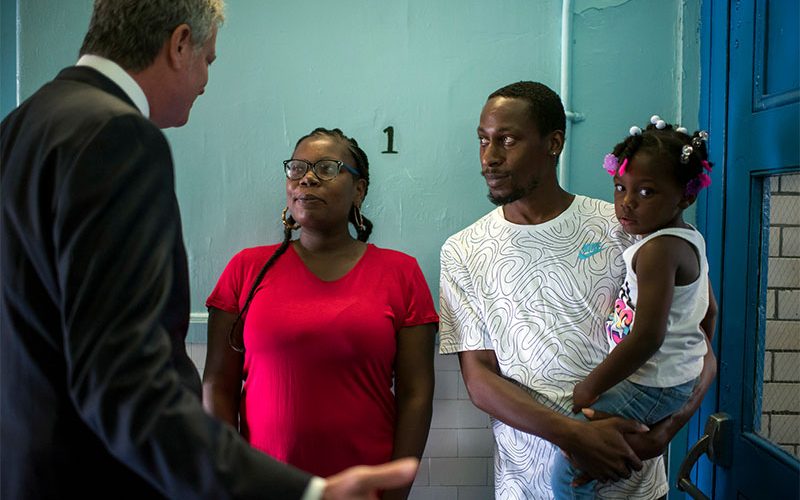 Across School Districts 7 and 23, the City will serve approximately 1,600 three-year-olds this fall. Today, 793 families received an offer to a new 3-K for All seat at a DOE district school, NYC Early Education Center, or Pre-K Center. There are also 776 existing seats for three-year-olds in EarlyLearn programs. DOE is on track to provide a seat for every three-year-old living in Districts 7 and 23 that wants one by fall 2018.

“For the first time ever, hundreds of parents are receiving the news that their three-year-olds have received a free, high-quality seat in school, and an invaluable head start in life,” said Mayor Bill de Blasio. “This extra year of instruction will provide our children with a level of academic and social development that they cannot get later on, while at the same time, alleviating some of the strain New York City’s working families face.”

“3-K for All is a game-changer for our children and families, and I share the excitement of families receiving an offer today. At this age, children are sponges, and they will benefit tremendously from an additional, invaluable year of early education,” said Schools Chancellor Carmen Fariña. “In free, full-day, high-quality 3-K for All, our students will build their academic and social skills, and they will be ready to hit the ground running and thrive in pre-K, kindergarten, and beyond.”

“Today is an exciting day on the path to 3-K for All, as families in Brooklyn and the Bronx receive the first-ever 3-K offer letters. Our investment in 3-K for All – building on our work to triple the number of free, full-day, high-quality pre-K seats – is going to make a real difference for the children and families of New York City, and we’re working tirelessly to ensure school gets off to a great start in September,” said Deputy Mayor for Strategic Policy Initiatives Richard Buery.

“We are proud that our EarlyLearn programs will once again play a critical part in supporting 3-K for All, just as they have for the City’s historic Pre-K for All initiative. All children deserve access to high-quality early childhood education. 3-K for All will further transform early care and education and set our youngest New Yorkers up for healthy childhood development and lifelong success,” said ACS Commissioner David Hansell.

In total, 2,321 families applied to 3-K for All for fall 2017, which included 790 families living in Districts 7 and 23. Of the families living in those two districts, 84 percent received an offer for a 3-K for All seat, and 76 percent received an offer to one of their top three choices. All interested families, including those living outside District 7 and 23 boundaries, were encouraged to apply. DOE outreach specialists are continuing to work with families who received an offer throughout the summer, to ensure their children are able to attend 3-K for All this fall. Families without an offer are receiving information on EarlyLearn programs in their neighborhoods for which they may be eligible, and are receiving support from the DOE outreach team to find a program that meets their needs.

By fall 2020, the City will expand free, full-day, high-quality 3-K for All to at least six additional school districts, for a total of eight districts. Each pair of districts will have a two-year expansion, with the last pair of districts starting in fall 2020 and having universal access in fall 2021. In order to achieve the vision of 3-K for All citywide, the City will need additional support from partners in the State and federal government.

The 3-K for All expansion for Districts 7 and 23 costs $16 million in its first year, and builds on substantial Equity and Excellence for All educational investments in these two communities. The continuum includes the Universal Literacy program, which will bring dedicated reading coaches to every elementary school in Districts 7 and 23 this fall; the Single Shepherd program, which pairs every middle and high schooler in these districts with a dedicated guidance counselor or social worker to support them on the path to high school graduation and college enrollment; and College Access for All, through which every middle schooler in these districts will be able to visit a college campus.

3-K for All builds on the success of Pre-K for All – through which the City has more than tripled the number of four-year-olds enrolled in free, full-day, high-quality Pre-K – and is part of a broader effort to create a continuum of high-quality early care and education programs for New York City children from birth to five years old. Research has found every dollar invested in high-quality early education saves taxpayers as much as $13 long-term.

There is extensive research supporting the transformative value of free, full-day, high-quality3-K for All, including the following:

As part of its commitment to free, full-day, high-quality 3-K for All, the City is also providing additional support to the public early childhood center programs currently serving over 11,000 three-year-olds across the City – including in Districts 7 and 23. These supports, which are similar to those DOE has brought to classrooms through Pre-K for All, include teacher training, family engagement, and social workers. These publicly funded early education programs are currently part of EarlyLearn – the contracted-care and education system managed by the Administration for Children’s Services (ACS) that includes Head Start centers, center-based childcare, and family childcare networks – and are available to families earning less than 200 percent of the federal poverty level. The DOE outreach team is also assisting programs in enrolling children, including through the online 3-K Finder and by directing families interested in 3-K to EarlyLearn programs in their neighborhood.

With support from ACS, the Human Resources Administration, and the Department of Health and Mental Hygiene, and a planning process involving providers and early childhood care and education experts, EarlyLearn programs are shifting to management by DOE as part of 3-K for All, enabling consistent high-quality standards under a single agency by early 2019. The DOE and ACS are working closely together throughout the transition of the EarlyLearn program from ACS to DOE. This change will also provide greater curricular alignment from early childhood through second grade, a single contracting relationship for early childhood education providers, integrated data collection, and seamless connections between early childhood development and 3K-12 education. In addition to programs serving three- and four-year-olds, EarlyLearn programs serving children from six-weeks-old through three-years-old are also shifting to management by DOE, including center- and home-based programs.

“Learning becomes more valuable the earlier it begins,” said Speaker Melissa Mark-Viverito. “By expanding our educational offerings to include 3-K for All, we are making a serious investment in the future of the youngest New Yorkers. As the City Council representative for School District 7, I am proud to see this initiative kickoff right here in the South Bronx, and thank Mayor de Blasio and Chancellor Carmen Fariña for introducing a program that will soon empower thousands of children throughout the five boroughs.”

“3-K for All moves us in the right direction, and it is great to see this effort kicked off in Community School District 23. We must be even more ambitious about delivering comprehensive early childhood development,” said Brooklyn Borough President Eric Adams.

U.S. Representative Jose Serrano said: “Like its predecessor Pre-K for All, 3-K for All is vital for educating children throughout NYC. I applaud Mayor de Blasio and Chancellor Fariña for working to ensuring universal pre-k is available to all three and four year olds in my district. I was once an educator and have seen firsthand how education transforms the lives of young people, their families, and the community as a whole. Students in District 7 will greatly benefit from this expansion and have the tools to ensure they are successful and able to achieve excellence.”

State Senator Velmanette Montgomery said, “Providing universal early childhood education to all of our children is a vital part of achieving equity in New York City. It is so important that we continue to invest in our children at these early stages and put in place the mechanisms that allow them to reach their full potential.”

“Our students deserve to have access to high quality education. I therefore commend Mayor Bill de Blasio for his progressive approach to addressing inequality in New York City. Any initiative to improve the educational landscape is a direct investment, which will pay big dividends, since a high quality education is directly linked to strong communities,” said State Senator Roxanne J. Persaud.

State Senator Kevin Parker said, “I want to thank Mayor de Blasio and Chancellor Farina for the 3K for All initiative.  It is a wonderful opportunity for parents and students of Community School District 23.  Many studies have shown how important early childhood education is for a child’s future, both academically and socially, and I know how much parents appreciate the chance to give their children the head-start they need to succeed. I look forward to this program’s growth in my community and New York City overall.”

Assembly Member Michael Blake said, “The earlier we provide a child with education and the tools for a lifetime of success, the better we are in The Bronx and as a society. 3K for All will provide transformational opportunities for District 7 and South Bronx families to prepare our young children to excel from the cradle to the career.  I commend Mayor de Blasio, Chancellor Farina, Deputy Mayor Buery, Commissioner Hansell and the entire administration for such a bold and transformative action that achieves education, equity and #BuildingABetterBronx.”

“We know that education impacts economic success and that for too long a quality education was mostly reserved for the few in privileged zip codes,” said Council Member Rafael Espinal. “It is time that District 23, which serves Ocean Hill, Brownsville and East New York finally get the focus and resources it deserves so that our students as young as 3 years old– who are among the most economically disadvantaged– have every opportunity for success.”

“I’m so pleased to see continued expansion to ensure more three-year-olds in our community have access to free full-day school,” said Council Member Rafael Salamanca, Jr. “The benefits of such programs – from the economic benefits for mom and dad to the developmental benefits to starting our kids early in the classroom—cannot be overstated. This is a win for Bronx families.”