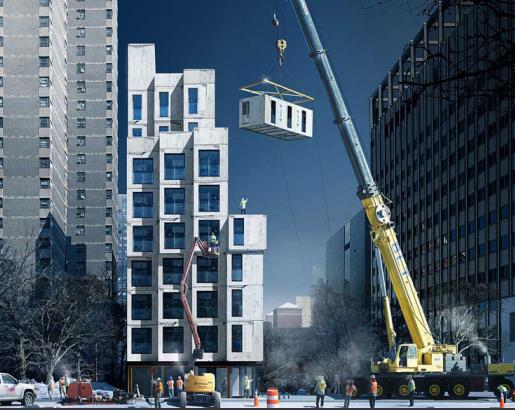 NEW YORK, NY – New York City Housing Preservation and Development (HPD) Commissioner Maria Torres-Springer announced today the release of a Request for Information (RFI) as well as a Request for Expressions of Interest (RFEI) for the City’s new modular construction pilot program, Modular NYC. The program will leverage the use of innovative modular design and technology that lowers costs and waste, while increasing the speed of construction of affordable housing.  The City plans to release a Request for Proposals (RFP) for a modular affordable housing development on one or more City-owned sites later this year that will be informed by the input gained through this RFI.

“New York City has long been a laboratory for innovation in affordable housing, and through Housing New York 2.0 we are pushing the envelope even further to pursue bold new design and construction techniques.  Through this RFI and RFEI, we’re harnessing the creativity of industry experts to find new ways to deliver affordable housing opportunities faster and more efficiently,” said HPD Commissioner Maria Torres-Springer. “I’m excited to debut this new initiative and look forward to hearing from potential development partners.”

“With the need for affordable housing so critical in our city, Modular NYC holds great promise as a mechanism for helping to address that need in a cost-effective and practical way,” said Assemblyman Steven Cymbrowitz. “It’s another example of finding creative solutions and building partnerships to ease the affordable housing shortage.”

Modular NYC — which is part of the City’s Housing New York 2.0 plan to finance 300,000 affordable homes by 2026 — will finance the creation of mid-rise multifamily, supportive, and senior housing developments via modular construction. Through the RFI, the City seeks to learn from parties across the real estate development spectrum and across geographies that have specific experience, knowledge, or insight into the modular construction process. The City will also assess the modular manufacturing industry’s capacity to deliver modules to the City and explore innovative applications of modular construction for public projects.

In addition to seeking general industry input through the RFI, the City has issued the accompanying RFEI inviting expressions of interest for modular affordable housing construction on private sites and previously designated public sites within the five boroughs where modular construction could be utilized. Qualified respondents may be for-profit, non-profit, or joint venture entities, and HPD encourages responses from Minority and/or Women Business Enterprises, as well as Community Housing Development Organizations and Community Development Corporations that bring enhanced and tangible community development benefits to the proposals.

HPD will work with successful respondents to this RFEI to expedite the pre-development process, targeting mid-2019 closings.  In addition, the City anticipates the RFI will provide meaningful input to a forthcoming Modular RFP that will be released later this year.  Participation in this RFI/ RFEI will neither preclude nor give advantage to any respondents’ abilities to participate in any future Modular RFP(s).