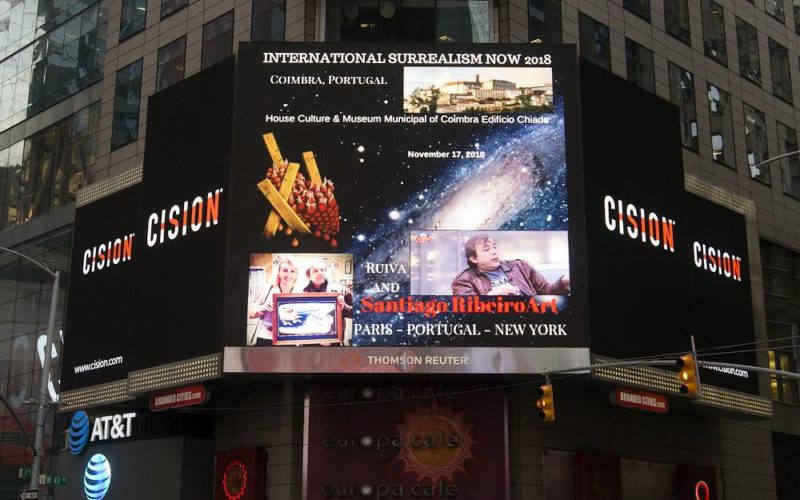 Art by Santiago Ribeiro on display at Times Square in New York heads to Coimbra, Portugal NEW YORK – Following the multimedia exhibition of Santiago Ribeiro’s art in Times Square, it will now head to the ‘International Surrealism Now’ exhibition in Coimbra, Portugal, having also been featured in Paris at the “Osmosis-Kiraméki Transfigured!” event along with cultural icons and renowned artists.

Portuguese surrealist painter Santiago Ribeiro has been featured since July 2017 at the Thomson Reuters and Nasdaq OMX Group at Times Square in New York City, and will remain highlighted throughout 2018.

“As usual, every time, I do something different and innovative and the idea of ​​exhibiting in Times Square, New York, shows how media and new technologies are a modern way to divulge our art.” – Santiago Ribeiro.

He has organized and participated in numerous individual and collective art exhibitions in Portugal and abroad. Ribeiro’s work has been featured at the U.S. Embassy in Lisbon, in the Portuguese American Journal, in Digital Meets Culture, Pressenza France, MetroNews.ru, Pravda in Portuguese, The Herald News, Associated Press and many other publications. His work will be shown daily at different intervals throughout the year. Based on dreams and visions, Ribeiro’s metaphorical surreal imagery surprises, breaks and triggers mixed feelings. His paintings have been described as, “complex compositions illustrating profound concerns about modern society and its individual and collective behavior.”

Its sponsors include the Bissaya Barreto Foundation, Câmara de Coimbra and the North American MagicCraftsman studio.

His work is represented in several private collections as well as in the contemporary art collection of the Machado de Castro National Museum and at the Bissaya Barreto Foundation in Coimbra, Portugal. Ribeiro is also the mentor of the ‘International Surrealism Now’ exhibition project where the city of Coimbra will open its doors this year at the Edifício Chiado Museum and Coimbra House of Culture in Portugal in November.