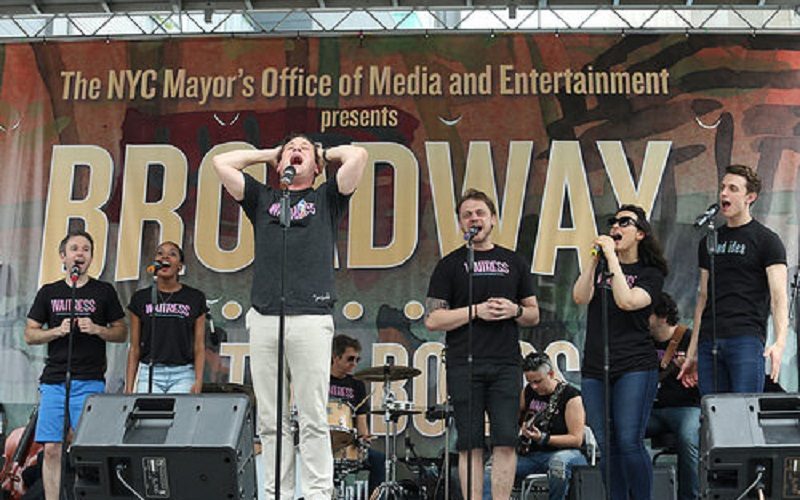 NEW YORK, June 7, 2018 /PRNewswire/ — The Mayor’s Office of Media and Entertainment today announced the 2018 lineup for its popular Broadway in the Boros series, featuring free performances by cast members and musicians of hit Broadway musicals in neighborhoods throughout New York City. Back for a third consecutive summer, these fun and entertaining shows are free, family-friendly, and open to the public.

Broadway is an essential component of New York’s vibrant entertainment and cultural scene, contributing billions of dollars to the local economy and helping to maintain New York City’s reputation as Theatre Capital of the World. Broadway’s home is known to many throughout the world as Manhattan’s Time Square or the Theatre District, but now fans and residents alike can see live Broadway musical performances in outdoor venues near where they live and work.

“We are thrilled to present a stellar lineup for this year’s Broadway in the Boros, a program that enables New Yorkers throughout the five boroughs to experience the extraordinary talents of our Broadway community,” said Media and Entertainment Commissioner Julie Menin. “We invite all New Yorkers to come out to parks in their neighborhoods to enjoy these musical performances and hope to even inspire some future Broadway stars in the audience.”

‘Broadway in the Boros’ aims to increase access to the magic of Broadway to all New Yorkers in Brooklyn, Queens, the Bronx, and Staten Island. For many families, ‘Broadway in the Boros’ may be their first or only opportunity to experience a currently-running Broadway musical. These unique outdoor events are presented in public parks and plazas in neighborhoods where live music programming is generally infrequent.

The Mayor’s Office of Media and Entertainment thanks its 2018 Broadway in the Boros partners, including: Brooklyn College Department of Theater, the Village Voice, Show-Score, and Bai.

The ‘Broadway in the Boros’ series celebrates ongoing partnerships with the Broadway theatre community including the American Federation of Musicians Union, Local 802, City agencies including the NYC Parks Department, and neighborhood organizations and local cultural institutions.

All ‘Broadway in the Boros’ events take place Fridays from 12:00 PM to 1:00 PM, rain or shine. In addition to performances, each event features Broadway tickets and giveaways, trivia games and more! All performances are hosted by the Julie James, host of the popular SiriusXM Radio show “On Broadway.”

* The Museum of the Moving Image is offering free admission to ‘Broadway in the Boros’ fans starting at 1:00 PM, right after the show! MOMI offers free admission every Friday from 4-8pm.

“I’m proud to welcome A Bronx Tale and Come from Away to Fort Greene, said Brooklyn Borough President Eric Adams. “I remember seeing my first show on Broadway and how transformative it was for me. I hope children and families from all across Brooklyn can have that same enriching experience at this free performance in one of our borough’s most unique open spaces.”

Assemblyman Marcos A. Crespo said, “I’m excited to welcome Broadway in the Boros to Soundview Park. Matching the beauty of our revitalized park and bringing such great iconic live Broadway performances to the community will make for a unique and memorable experience for Bronx residents and others to enjoy.”

“A night on Broadway remains largely inaccessible to so many families and communities across NYC, but now thanks to Broadway in the Boros we are able to bridge that gap,” said New York City Council Majority Leader Laurie A. Cumbo. “Art serves many purposes – to entertain, to teach, to both push audiences out of their comfort zone and reaffirm their humanity, and with this effort we can bring all of that Broadway magic and more to communities across the City.”

New York City Council Member Debi Rose said, “Our city is a center of musical talent and energy, and Broadway in the Boros gives Staten Islanders a sample of that talent without having to cross the harbor. As a lifelong fan of musicals, I’m thrilled to help bring dozens of Broadway stars to our beautiful waterfront space at Lighthouse Point Plaza for all Staten Islanders to enjoy. I thank my partners in government for bringing this event to our shores, and I encourage all of my constituents to come out and enjoy this summer afternoon performance on our waterfront.”

Next PostNYC Unveils Plan to Save Fashion Production in Garment District