NYC Unveils Plan to Save Fashion Production in Garment District 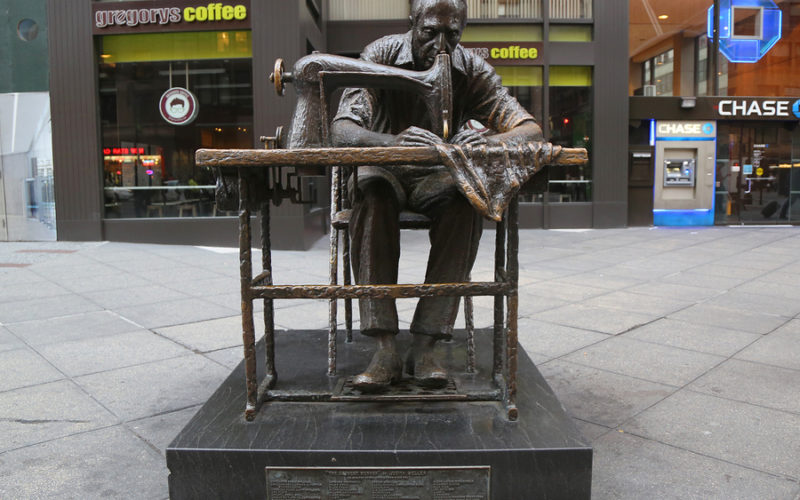 Recently, de Blasio Administration officials, City Council Speaker Corey Johnson, Manhattan Borough President Gale Brewer, and industry and community leaders unveiled a comprehensive package of support for fashion production in the Garment District. The plan, which follows recommendations from the Garment District Steering Committee, creates support initiatives including a new tax incentive program to preserve manufacturing space in the Garment Center; supports a public-private partnership to acquire a building dedicated to garment production; and institutes a special permit to curb hotel development in the district. In addition, the plan includes a proposal for targeted zoning changes that will have a positive impact on the Garment District. The zoning changes associated with this package will begin the City’s public review process on June 11.

“Fashion design and manufacturing are both an intrinsic part of New York City’s economic future. Thanks to our agreement with Speaker Johnson, Manhattan Borough President Brewer, and our industry partners, that future will continue to include production in the Garment District,” said Deputy Mayor Alicia Glen.

“After decades of previous efforts, the de Blasio Administration has delivered a plan, developed in collaboration with industry stakeholders, elected leaders and the local community, to stabilize and preserve New York City’s historic fashion industry in the Garment District for years to come,” said NYCEDC President and CEO James Patchett. “The City’s iconic fashion industry is critical to our economic health, and this package represents a new chapter for the century-old fashion cluster, bringing its long-established businesses and new uses into a modern era that will reinforce Midtown as one of the City’s most vital job centers. I thank Speaker Corey Johnson and Borough President Gale Brewer for their leadership and steadfast commitment to making this plan a reality.”

“After years of effort, we’ve got a plan that will preserve the heart and soul of the city’s iconic Garment District. We still have a long public process ahead of us and I’m looking forward to a collaborative process that includes feedback from all stakeholders, but I am confident that working together we will ensure that New York City remains the fashion capital of the world. I want to thank EDC and the many industry advocates who have been working for years to get us where we are today,” said City Council Speaker Corey Johnson.

“The Garment Center’s unique ecosystem of skilled workers and specialty suppliers clustered in one place is the foundation that the wider New York fashion world is built on. What we’ve negotiated here is a real plan to preserve it for years to come,” said Manhattan Borough President Gale A. Brewer. “This is much more than just a tax benefit program, although the IDA benefits are central.  It’s an IDA program combined with a real commitment of resources to purchase permanent space. This package will help keep the fashion industry anchored here in New York.”

The Garment Center IDA program is a tax incentive package through the New York City Industrial Development Agency (NYCIDA), which will allow property owners to offer long-term, affordable leases to fashion manufacturers, including companies that provide a service that supports the garment production supply chain, such as pattern-making, embroidery, embellishment, dyeing services and more.

The program requires property owners to offer 15-year leases with a maximum gross rent of $35 per square foot, which includes utilities and other expenses, and are subject to a penalty schedule and annual compliance review. In exchange, the participating property owners will receive discretionary tax benefits from the NYCIDA that range from $1.00 – $4.00 per square foot of manufacturing space that ranges between 25,000 – 100,000 square feet. To date, NYCIDA has commitments to preserve 300,000 square feet of production space through this program and welcomes additional participation. For more information, click here.

In addition to the IDA program, the de Blasio Administration has committed up to $20 million in City capital to facilitate the acquisition of a building in the Garment District. The commitment requires a public-private partnership with a nonprofit organization to operate and manage the building as a dedicated production space. The City is slated to release a request for expressions of interest to advance this opportunity in September 2018.

The plan includes amendments to existing zoning and will be presented for certification into the City’s Uniform Land Use Review Procedure (ULURP), a public review process that allows local community boards, elected officials, the City Planning Commission, and City Council to evaluate and vote on the zoning changes, on June 11. The proposed targeted zoning change will:

“As a member of the Garment District Steering Committee, what NYCEDC is proposing demonstrates hard work on their part and is a positive response to the working group’s requests and the industry’s needs, and it’s a doable plan as well. I believe in it and am committed to helping it move forward and working with the industry on this,” said Steven Kolb, President and CEO, Council of Fashion Designers of America.

“This plan provides needed investments in the fashion manufacturing sector, while at the same time removing antiquated zoning restrictions that have simply failed to stop the exodus of jobs overseas,” said Barbara A. Blair, President, Garment District Alliance. “We applaud the efforts of the City and EDC, as well as City Council Speaker Corey Johnson and Manhattan Borough President Gale Brewer, with addressing the longstanding and complex challenges of the fashion industry and the Garment District.  This plan offers the best opportunity yet to bolster the economic diversity of the area while offering a long-term sustainable solution for fashion manufacturers.”

“This is a historic moment, especially for the manufacturing sector of the fashion industry. I trust and believe that the initiative will not only stabilize the business, it will both sustain and grow it with the political will that has been expressed and promised, and the participation of all stakeholders,” said fashion designer Yeohlee Teng.

“This plan represents a win-win opportunity for all New Yorkers. It will result in long term stability for the garment manufacturing industry, while generating new revenue to fund vital city services. We thank City Council Speaker Johnson and Manhattan Borough President Brewer for their thoughtful leadership. We commend Deputy Mayor Glen and NYC Economic Development Corporation President and CEO James Patchett for their tireless dedication in making this plan a reality,” said John H. Banks, President, The Real Estate Board of New York.

In addition to the IDA program and $20M capital commitment, the City has worked with the Council of Fashion Designers of America (CFDA) and the Garment District Alliance to develop a comprehensive suite of support initiatives for fashion manufacturers. This unprecedented package is supported by a $25 million financial commitment by the Garment District Alliance. Comprised of interventions that include investing in technology through the successful Fashion Manufacturing Initiative (FMI) and additional services to support garment manufacturers, the program will be available to factories across the five boroughs.

This robust package was developed by the City following outreach to garment manufacturers, designers, suppliers and industry leaders to better understand the challenges that are hurting the industry today. Developed through one-on-one interviews, focus groups, and feedback from the Garment Industry Steering Committee, which was convened last year by Borough President Brewer, the package is a holistic response to the industry’s wide-ranging needs and will stabilize and strengthen this critical and historic NYC sector through a decade’s worth of investments.

This initiative builds upon the de Blasio Administration’s commitment to garment manufacturing across the city, including the $136 million investment in the Made in NY Campus in Sunset Park, the second-largest cluster of garment manufacturing in the City. The investment will create a 200,000-square-foot garment manufacturing hub at Bush Terminal. The hub will provide small white-box spaces ranging from 2,000 to 20,000 square feet to companies working in pattern making, marking and grading, cutting and sewing, and sample making. The hub will also include shared services and related uses to support the success of these garment firms and the larger Sunset Park garment cluster.

History of Garment Manufacturing in NYC

The fashion industry is a significant contributor to the city’s economy, employing over 5% of the city’s total workforce.  Local garment manufacturing is integral to the success of the fashion industry and can be competitive with respect to quality, time and convenience, and local production is equally important to both emerging and established designers.

Today, there are approximately 1,600 garment manufacturing firms citywide, and about 25% of these businesses, or approximately 400 firms, are in the Garment District. These companies face immense global competition and real estate pressures despite preservation attempts.

Next PostBecome a Sponsor of Fashion On The Hudson July 14, 2018