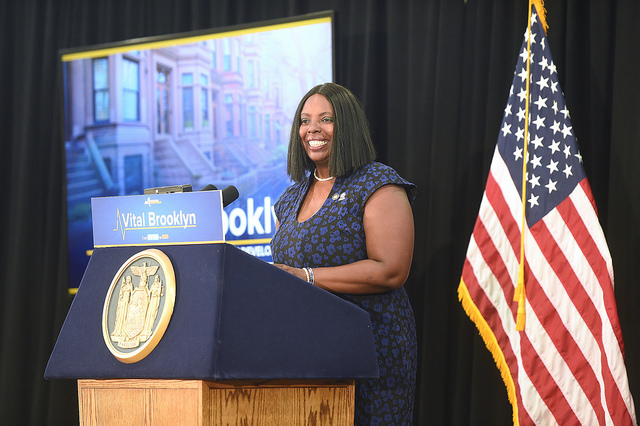 Tish James, the former Public Advocate for New York City, will be moving into her new role as the NY State Attorney General in a couple of weeks, which will leave the Public Advocate seat open for a number of candidates who are trying to fill it. The election will take place some time in February, 2019.

In late November, Brooklyn Assemblywoman LatriceWalker announced that she is running for the seat, and Walker believes she’s the best person for the position.  In an interview on NY1, Walker stated, “I’ve defended numerous residents facing eviciton throughout New York City, and I’ve defended people who were before the jurisdiction of the criminal justice system. The Public Advocate’s office is about advocating, agitating, litigating, and legislating,  and I have done all of those things throughout my career. ”  Walker also stated, “justice, fairness and equity are the values that guide me as a mother, as a community leader and as an Assemblywoman, and they are the values that will shape my service and vision as New York City’s next public advocate”.

Below is Latrice Walker’s bio from her NY State Assembly page.

Latrice Monique Walker was elected to the New York State Assembly in 2014 to fill a vacant seat. A native of the Brownsville section of Brooklyn, Assemblywoman Latrice Walker is a licensed attorney, and has made a name for herself as a strong voice and advocate from the streets of Brownsville to the Halls of Justice.
Assemblywoman Walker was educated in the New York City public schools. She went on to receive her undergraduate degree from SUNY Purchase College, where she double-majored in Sociology and Political Science. She achieved a Juris Doctorate Degree in Law from Pace University and was admitted to the New York State Bar in 2007.
Assemblywoman Walker has dedicated her life’s work to advocacy. For nearly a decade, Assemblywoman Walker has worked with local elected officials to preserve affordable housing while advocating for residents of the New York City Housing Authority (NYCHA). Born and raised in Prospect Plaza, a NYCHA development demolished under a Federal HOPE VI grant, the Assemblywoman has firsthand experience on the effects of displacement and the need for adequate legislative representation. As a litigator, she has helped tenants avoid eviction and defended young minority victims of “stop-and-frisk” practices.
Assemblywoman Walker is not new to the legislative process, having served as Counsel to U.S. Representative Yvette D. Clarke since 2007; helping to plan, organize, and integrate the congressional agenda to improve her community. She played a central role in facilitating the federal, state, and city governments’ community planning and development initiatives while evaluating their economic and civic effect on the community.
Assemblywoman Walker represents the 55th Assembly District in the New York State Legislature as a member of the Housing, Election Law, Energy, Correction, and Insurance Committees. Currently, she serves as the Chair for the Subcommittee on Renewable Energy.
Assemblywoman Walker is a member of the New York City Bar Association and a founding member of the Ocean Hill-Brownsville Coalition of Young Professionals. As a private citizen, Latrice remains very active in community affairs and is a member of Wayside Baptist Church, a preeminent faith institution in her community.
Assemblywoman Latrice Walker resides in Ocean-Hill Brownsville and is the proud mother of a daughter, Nile Anderson.
For updates on Brooklyn politics, housing, real estate development, and more, be sure to Subscribe to BrooklynBuzz.com.