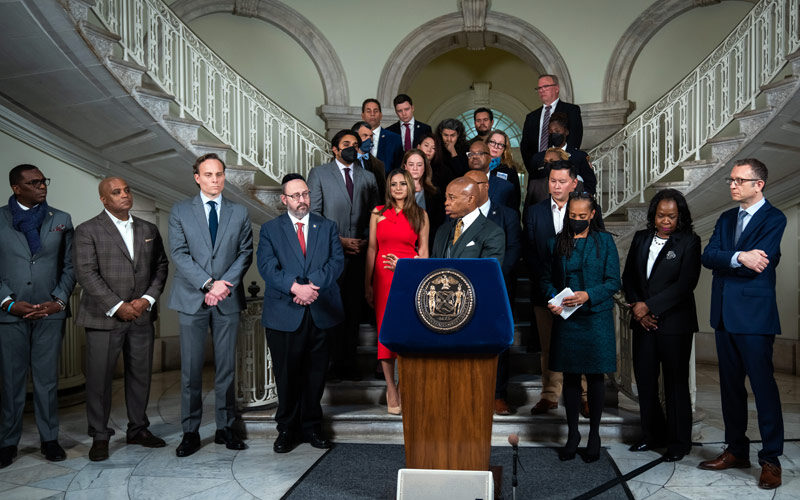 New York City Mayor Eric Adams recently announced a new pathway forward to address the ongoing crisis of individuals experiencing severe mental illnesses left untreated and unsheltered in New York City’s streets and subways. In a public address, Mayor Adams detailed a compassionate new vision to tackle this crisis, beginning with a directive being issued immediately to city agencies and contractors involved in evaluating and providing care to individuals in psychiatric crisis so that more people in need of help receive it. Mayor Adams also laid out an 11-point legislative agenda that will be among his top priorities in Albany during the upcoming legislative session. The agenda takes aim at gaps in New York State’s Mental Hygiene Law that intensify the city’s challenges in meeting the needs of its most vulnerable residents with severe mental illness. Finally, Mayor Adams announced new clinical co-response teams deployed in New York City’s subways to respond to those with serious mental health issues, as well as an enhanced training in partnership with New York State for all first responders to compassionately care for those in crisis.

“As a city, we have a moral obligation to support our fellow New Yorkers and stop the decades-long practice of turning a blind eye towards those suffering from severe mental illness, especially those who pose a risk of harm to themselves,” said Mayor Adams. “It is not acceptable for us to see someone who clearly needs help and walk past them. For too long, there has been a gray area where policy, law, and accountability have been unclear, and this has allowed people in desperate need to slip through the cracks. This culture of uncertainty has led to untold suffering and deep frustration, but we cannot and will not allow it to continue. Today, we are making a clear statement to our fellow New Yorkers that, by leading with compassion and care, we can do much more to help those among us in a severe mental health crisis, even when they are unable to, by no fault of their own, recognize their own needs. This is our moral mandate as a city and we will not fail to deliver for our most vulnerable.”

In accordance with state law and court precedent, Mayor Adams’ directive clarifies that outreach workers, city-operated hospitals, and first responders have the legal authority to provide care to New Yorkers when severe mental illness prevents them from meeting their own basic human needs to the extent that they are a danger to themselves. The directive — issued by Mayor Adams today — seeks to dispel a persistent myth that the legal standard for involuntary intervention requires an “overt act” demonstrating that the person is violent, suicidal, or engaging in outrageously dangerous behavior likely to result in imminent harm.

Mayor Adams also announced today that the city is developing a tele-consult line to provide police officers in the field with direct access to clinicians. This new tele-consult line will provide critical clinical advice to police officers when dealing with individuals in distress and ensure a compassionate response for those suffering with untreated serious mental illness.

Ahead of the winter months — when homelessness typically increases on subways due to the cold weather — the Adams administration has begun deploying subway clinical co-response teams, made up of joint patrols of the New York City Department of Health and Mental Hygiene (DOHMH) and the New York City Police Department (NYPD), to patrol high-traffic subway stations and respond with a clinician-led approach to those appearing to have serious mental health issues.

Finally, in partnership with New York State, the city will also provide comprehensive training to all clinicians, outreach workers, and first responders to ensure compassionate care that potentially could include involuntary removals when interacting with individuals in distress suffering from severe mental illnesses. The city will be rolling out this training immediately.

“With this announcement, we are bolstering our strategies to get people who are in danger due to untreated severe mental illness the help they need,” said Deputy Mayor for Health and Human Services Anne Williams-Isom. “We are adding layers of additional support for our first responders to work with clinical specialists in the moment and at the time it is needed, and we are pursuing all other areas for assistance: Health, social services, legal, and legislative. Thank you to our teams across government working to see that this is a coordinated, whole-of-government effort.”

“You can’t effectively have public safety without adequate mental health care — the two go hand-in-hand,” said Deputy Mayor for Public Safety Philip Banks III. “For too long, public safety personnel’s hands have been tied in getting those in need care before they hurt themselves or others. These directives and proposals are a common-sense way to clear those impediments and get help for those who need it most.”

“As the largest provider of behavioral health care in New York City, NYC Health + Hospitals plays a critical role in the serious mental illness continuum of care,” said Mitchell Katz, MD, president and CEO, NYC Health + Hospitals (H+H). “We will work with our partners in the city and state to ensure that our patients receive the highest quality of care. I want to thank Mayor Adams for his commitment to New Yorkers in need.”

“Today’s announcement reaffirms Mayor Adams’ commitment to addressing the needs of some of the most vulnerable New Yorkers,” said Mayor’s Office of Criminal Justice Director Deanna Logan. “Investment in public health solutions, including mental health treatment, is critical to keeping New Yorkers safe. Necessary solutions like those outlined today will result in safer, healthier communities for all.”

Since taking office in January, the Adams administration has made significant investments to address the severe mental health crisis afflicting New Yorkers and connect individuals suffering from untreated severe mental illness to care. In February, Mayor Adams rolled out the “Subway Safety Plan” to connect people experiencing homelessness on the subway to shelter. Since that launch, the city has effectively connected more than 3,000 people experiencing homelessness, some of whom are also in mental health crisis, to shelters and safe havens.

Mayor Adams has also doubled down on investments in community supports for those living with serious mental illnesses, including investing in the expansion of the city’s clubhouse program. Clubhouses follow an evidence-based model of psychiatric rehabilitation: A one-stop treatment facility that helps people with severe mental illnesses through their recovery by providing peer support, access to services, employment and educational opportunities, socialization, and recreation in a safe, restorative, and structured setting. DOHMH is expanding the capacity at some of the most successful clubhouses, with the goal of engaging 500 more members this fiscal year. The Adams administration also launched CONNECT: Continuous Engagement between Community and Clinic Treatment earlier this year as a new model of mental health treatment that focuses on holistic care, including for people experiencing severe mental illness.