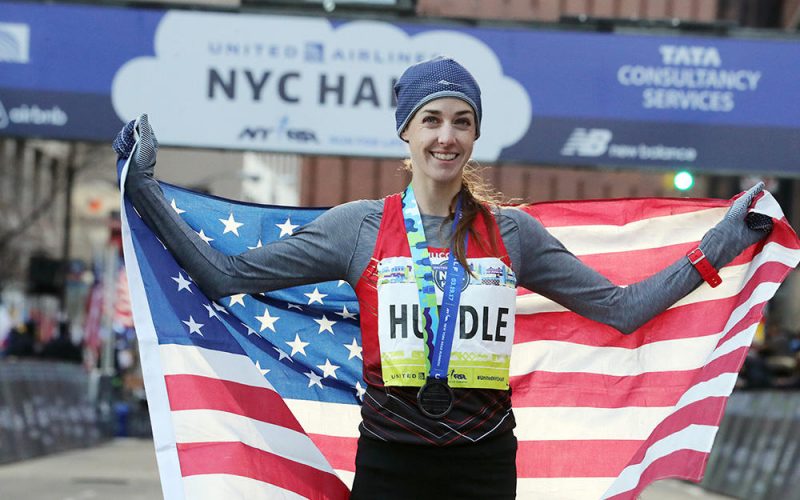 American runner Molly Huddle and South African wheelchair racer Ernst van Dyk both won their third consecutive United Airlines NYC Half titles and Ethiopian Feyisa Lilesa and American Susannah Scaroni took their first victories in the race on Sunday, March 19, as 21 Olympians and 11 Paralympians led the way for nearly 20,000 runners through the 13.1-mile course from Central Park to Lower Manhattan.

Huddle, an NYRR Team for Kids Ambassador, took the tape in 1:08:19, just ahead of her training partner Emily Sisson, who was making her half-marathon debut on the streets of New York.

Sisson was second in 1:08:21, just steps behind Huddle, followed by Burundi’s Diane Nukuri in 1:09:13. Huddle’s time was the third-fastest ever in the 12-year history of the event; she set the event record last year.

“I never would have thought I could come back here and win three times,” Huddle said. “I remember the first win was such a surprise for me, and last year we ran so fast. I just feel really lucky to have won a third time. Every time is really difficult with an international field. New York Road Runners brings in some of the best of the best. Some people are in marathon buildups but some people were really gearing up for this race. I feel like it was a really cool win, and just contributes to my enthusiasm for New York.”

Huddle and Sisson, both Providence, RI, residents, came out quick from the start line, and just after the 5K mark, the pair, along with U.S. Olympic marathoner Amy Cragg, began to pull away from the pack. Nukuri and Kenya’s Edna Kiplagat eventually passed by Cragg, who finished the day in fifth place.

In the professional men’s race, Lilesa’s time of 1:00:04 was the fifth fastest in event history and fastest in the last five years. The Rio 2016 Olympic silver medalist was challenged heavily by Great Britain’s Callum Hawkins, who came second in 1:00:08, and fellow Ethiopian Teshome Mekonen, who was third in 1:00:28. He outsprinted them both down the final stretch toward Wall Street, taking his first win in 2017 after finishing second at January’s Houston Half Marathon in a photo finish.

“After I came back from Rio, my body was not fit, and I didn’t think I was going to win,” Lilesa said. “After that, I lost two races. I am very happy now, and I’m getting very good feelings from winning the NYC Half.”

Japan’s Kenta Murayama led the professional men’s race early on but faded to fifth, crossing the line in 1:00:57, one place and two seconds behind defending event champion Stephen Sambu of Kenya.

Chris Derrick was the top American finisher in the men’s field, with a personal-best time of 1:01:12.

South Africa’s two-time New York City Marathon champion and 10-time Boston Marathon champion Ernst van Dyk won his third consecutive title in the men’s wheelchair division, clocking in at 47:28 after taking the lead very early on in a hilly Central Park. The U.S.’ Daniel Romanchuk took second place in 47:28, five tenths of a second behind van Dyk, and he was followed by Japan’s Kota Hokinoue in third place with a time of 47:31.

“It was a tough race. It was a lot different from last year,” van Dyk said. “Last year, I went for the record, and I went hard from the beginning, and I got away and stayed away. This time I got away in the beginning, but then the group coasted back to me. In the end, I knew it was going to be a sprint finish at that point.”

U.S. Paralympian Susannah Scaroni picked up her first-ever title in a NYRR event, taking first place in the women’s wheelchair division in 55:06. Scaroni – a University of Illinois teammate of NYRR Team for Kids Ambassador Tatyana McFadden who scratched because of her health – took the lead early and never looked back. It was her fourth consecutive top-three finish in the event.

“The reason I come back during the two coldest races of the year is because it’s so great here,” Scaroni said of New York. “Climbing is my strength, so I knew I had to go hard at the beginning. I had to get through the hills as fast as I could, and then just had to maintain that, which was helped by the tailwind the rest of the course.”

Finishing behind her in 57:35 was her teammate and two-time New York City Marathon champion Amanda McGrory, followed by Margriet van den Broek of the Netherlands in 57:57.

This was the 12th running of the United Airlines NYC Half – the first of five events in the NYRR Five-Borough Series. The professional athlete prize purse totals $115,000. The course took runners through a tour of Manhattan–through Central Park, Times Square, and down the West Side Highway to the finish in Lower Manhattan.

The NYRR Times Square Youth Run at the United Airlines NYC Half featured 1,000 kids ages 7-18 who competed in a 1500-meter out-and-back road race on Seventh Avenue that started and ended in Times Square. The race included a youth wheelchair heat for the second straight year, with McFadden holding the finish-line tape, highlighting her commitment to NYRR’s Youth Wheelchair Training Program.