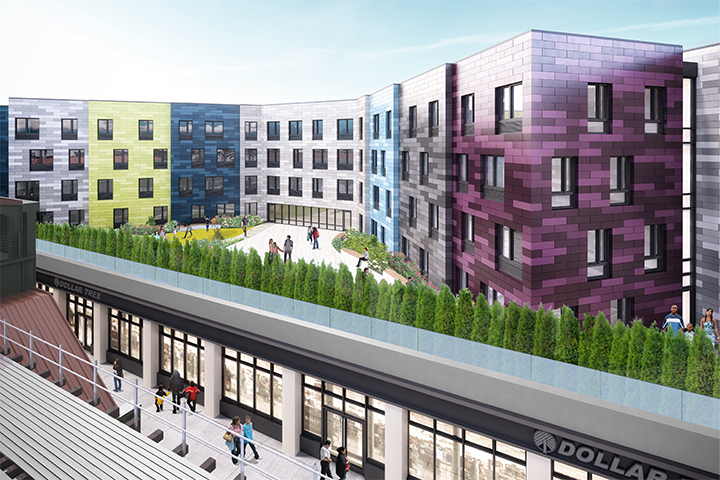 New York City Economic Development Corporation (NYCEDC) President and CEO James Patchett announced at a press conference that nearly $80 million in projects are already in the pipeline to be awarded to McKissack and McKissack, Noble Strategy, and Armand, three minority or women-owned construction management firms. In addition, NYCEDC is rolling out the first cohort of prequalified M/WBE ConstructNYC contractors who will have exclusive access to bid on certain NYCEDC projects.

Mr. Patchett was joined by Deputy Mayor for Strategic Policy Initiatives Richard Buery, City-wide Director of the M/WBE program; Director of the Office of M/WBEs and Senior Advisor Jonnel Doris, and dozens of representatives from M/WBE construction firms and ConstructNYC contractors.

In 2016, NYCEDC launched the ConstructNYC program to catalyze the prequalification and development of small to medium-sized M/WBE contractors through comprehensive training, on-site technical assistance, and mentorship. Once prequalified, M/WBE contractors have exclusive access to bid on certain NYCEDC projects up to $1 million, access to mobilization capital to prevent cash-flow gaps, and to receive fast-tracked payments.

Furthering efforts to support diverse and emerging businesses in the construction and building trades, NYCEDC is also entering retainer contracts with M/WBE firms Noble Strategy, Armand, and McKissack and McKissack to oversee projects, including pipeline projects valued at nearly $80 million, such as the general rehabilitation and maintenance at the Brooklyn Army Terminal and infrastructure improvement at the Hunts Point Food Distribution Center. In turn, these firms, along with Skanska and Gilbane Building Company, will utilize prequalified ConstructNYC firms to work on certain critical construction projects throughout the City. All five construction management firms have committed to meeting a 30 to 38 percent M/WBE participation goal.

“We’re excited to roll-out the first cohort of prequalified ConstructNYC M/WBE contractors. These 32 small to medium sized firms received top-notch training and now have exclusive access to bid on City contracts up to $1M,” said NYCEDC President James Patchett. “Through catalytic investments like ConstructNYC and by awarding nearly $80M in projects to M/WBE construction management firms, NYCEDC is doubling down on our commitment to level the economic playing field and increase access across the board for M/WBEs. The Mayor has pledged to create 100,000 good jobs over the next decade, and we are using every tool we have.”

“ConstructNYC is a shining example of applying the practices that have been proven to lead to more contract dollars and contracting opportunities for M/WBEs. Standardizing these best practices within every City agency that offers contracting opportunities will help us reach the ambitious goals the Mayor has set forth for the City’s new M/WBE program. Congratulations to the winning firms and thank you NYCEDC for recognizing and utilizing the talent of minority and women-owned firms,” said Richard Buery, Deputy Mayor for Strategic Policy Initiatives and Citywide M/WBE Director.

“$80 million in projects awarded to M/WBEs that have committed to meeting an ambitious 30 to 35 percent M/WBE goals is nothing to gloss over. With ContructNYC, EDC has brought a creative initiative to the table that is breaking down barriers that have, in the past, kept M/WBEs from winning City contracts,” said Director of the Mayor’s Office of M/WBE’s and Senior Advisor Jonnel Doris. “It’s clear that EDC and this administration know that this City truly prospers economically when all New Yorkers – regardless of race, gender or ethnicity- have the proper resources and support they need to thrive.”

“As the Council’s Chair of Small Business Committee, providing access for M/WBEs has always been a top priority. Small businesses are the cornerstones of our city and neighborhoods.  I am pleased to learn the NYC Economic Development Corporation (EDC) has pre-qualified over 30 M/WBE firms to work on various projects in the ConstructNYC program, which will provide access to over $25 million dollars in contracts this year.  Congratulations to all the selected firms and the EDC for a job well done,” said Council Member Robert Cornegy. “I encourage more M/WBEs to apply for the program and let’s continue to provide equal parity among all New Yorkers in business.”

“In order for more M/WBE firms to break into New York City’s construction industry, it is essential that they have access to significant government contracting opportunities. As co-chair of the New York City Council Women’s Caucus, I am thrilled to learn that NYC EDC’s ConstructNYC has been able to pre-qualify over 30 small and medium sized M/WBE construction contractors over the last year to work on EDC projects. And it’s very encouraging that three of the program’s five construction managers are also M/WBEs. I strongly encourage M/WBE firms across the city to reach out to ConstructNYC, and find out if they can take advantage of the program’s technical assistance, exclusive access to bidding, and other resources,” said Council Member Helen Rosenthal.

“ConstructNYC has responded in an admirable way to address the need for more M/WDBE contracts and funding by focusing on the small to midsize M/WDBE contractors to work on New York City Economic Development Corporation projects,” said Assembly Member Rodneyse Bichotte, Chair of the Subcommittee on the Oversight of Minority- and Women-Owned Business Enterprises. “Participating firms will have access to fiscal management training, pre-qualified firms will have access to NYCEDC contracts and will also partner with Capital Programs and Asset Management. Having some of the city’s major construction firms as managers is big and the fact that 3 of them are MWDBE’s makes it an even greater opportunity M/WDBE firms. I want to thank the NYCEDC and ConstructNYC for this initiative and for all of the efforts made towards achieving such an important win for M/WDBE’s, especially in construction.”

“As an MWBE subcontractor and prime contractor, McKissack has been involved in some the city’s most important projects – and now we’re working with the NYCEDC to provide construction management services on new, large-scale projects in Harlem and the Bronx,” said Rance MacFarland, President of McKissack and McKissack. “Working with the EDC, McKissack is proud to support their ConstructNYC program to provide contract opportunities to prequalified small to medium M/W/DBE contractors.”

“EDC’s advocacy and support is essential not only to the success of the M/WBE construction firms  and contractors that are prequalified through ConstructNYC, but it’s also essential to expanding capacity and strengthening a highly capable workforce in order to keep pace with New York City’s growing infrastructure demands,” said Barbara Armand, Founder and CEO of Armand Corporation. “We applaud NYCEDC for their leadership on this important initiative.”

“NobleStrategy is deeply appreciative of the opportunity to contribute to the city’s growth and we praise NYCEDC’s leadership for creating opportunities to help small and medium-sized firms advance to the next level by providing direct contract opportunities,” said William S. Parrish, Jr., President & CEO, NobleStrategy.

“We are proud to work with NYCEDC to build outstanding new projects that grow New York’s economy while also expanding MWBE participation in the construction industry,” said Bill Gilbane III, Senior Vice President, Gilbane Building Company, New York Division. “Diversity is a critical component of our growth strategy and we are committed to doing our part to build capacity in the City’s much-needed ConstructNYC program.”

“As a mission-based Community Development Financial Institution, BOC Capital is devoted to helping minority-owned and woman-owned businesses whose opportunities are hindered by lack of access to capital and management support,” said Nancy Carin, Executive Director of BOC Capital. “BOC Capital is honored to be partnered with NYCEDC in providing customized training and coaching to MWBE construction contractors as part of ConstructNYC. We believe the ConstructNYC program is an important strategy in achieving greater equity in access to opportunity and improving the economic prospects of hard-working men and women in construction.”

Small- to medium-sized M/WBE contractors often face significant barriers that prevent them from winning City contracts, such as high insurance requirements, limited access to networks and information, and a lack of access to capital at affordable rates. By allowing ConstructNYC contractors to bid on NYCEDC projects, we are helping to reduce some of those barriers while providing the opportunities to develop the experience they need to compete for future projects.

Last September, Mayor Bill de Blasio set an ambitious goal of awarding at least 30 percent of the dollar amount of City contracts to M/WBEs by 2021. NYCEDC is well on its way to surpassing that goal, having awarded 28 percent of contracts to M/WBE firms for the first half of FY 2017. NYCEDC is accepting applications on a rolling basis. For more information on this program and for a list of ConstructNYC firms, visit edc.nyc/constructnyc.

New York City Economic Development Corporation is the City’s primary vehicle for promoting economic growth in each of the five boroughs. NYCEDC’s mission is to stimulate growth through expansion and redevelopment programs that encourage investment, generate prosperity and strengthen the City’s competitive position. NYCEDC serves as an advocate to the business community by building relationships with companies that allow them to take advantage of New York City’s many opportunities. Find us on Facebook or follow us on Twitter, or visit our blog to learn more about NYCEDC projects and initiatives.