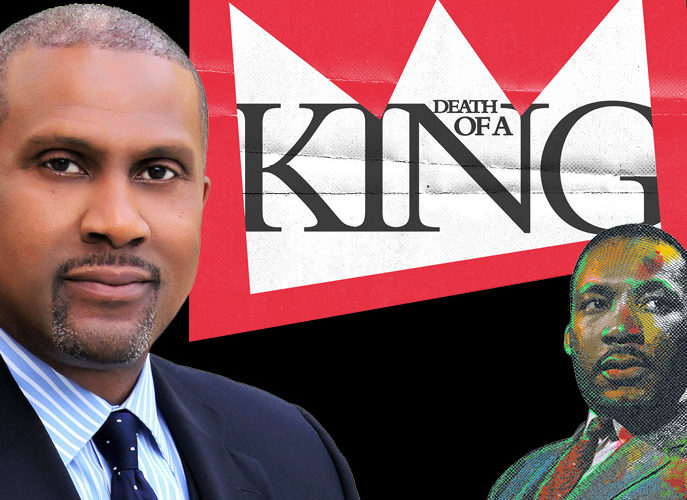 Smiley narrates this joyful tribute that tells the little-known story of Dr. King’s final year. Against all the odds and with his popularity in deep decline, King summoned the courage, conviction, commitment and character, to bring a message of peace, equality and justice to a bitterly divided nation. Joining Smiley will be renowned jazz pianist, Marcus Roberts, the genius of modern piano, who will be performing stirring, original compositions. Roberts’ new album, Trio Crescent: Celebrating Coltrane debuts later this month. Tony Award-winning Broadway and film director Kenny Leon (A Raisin In The Sun, The Mountaintop, August Wilson’s Fences) serves as Creative Consultant.

This stage presentation, sponsored by Walmart, brings together elements of visual imagery and live music with eloquent prose, declaring the truth of the impact that one man’s integrity and strong faith in humanity had on the American people, and people across the globe– a truth as timely today as it was 50 years ago.

“In our current political climate, DEATH OF A KING represents a narrative shift that’s not just about the normal discussion of left versus right and conservative versus liberal, but really a reset of our deepest values,” said Tavis Smiley. “ Dr. King said in 1968 we needed a revolution of values, and 50 years later, DEATH OF A KING aims to reunite America with its best self.”

The book Death of A King is a New York Times best-seller and is being developed as a television event series with Emmy Award-winner J.J. Abrams and Smiley executive producing, in partnership with Warner Bros. Television.  Smiley’s PBS late-night talk show, Tavis Smiley, is currently in its 14th successful season.

For additional information about this unique event, please visit www.DeathOfAKingTour.com.

Tickets to the Brooklyn engagement may be purchased online at Ticketmaster (http://bit.ly/2ijC8GV) or in person at the Kings Theatre box office now.

A limited quantity of VIP tickets are available and include an exclusive opportunity to meet Tavis Smiley at a post-show photo experience. VIP ticket holders will receive an autographed copy of the official Death of a King tour book, along with a CD featuring Marcus Roberts’ original music composed for the production.

Tavis Smiley is currently host of the late-night television show Tavis Smiley on PBS its 14th season, as well as “The Tavis Smiley Show” from Public Radio International.  He is the author or co-author of 21 books, and his non-profit Tavis Smiley Foundation is now in the midst of a $3 million four-year campaign called “Ending Poverty:  America’s Silent Spaces” to help focus on alleviating endemic poverty in America.  TIME magazine named Smiley to the TIME 100, a list of “The World’s 100 Most Influential People.”

Marcus Roberts is a brilliant composer and jazz pianist whose career was featured on a segment of the celebrated CBS News television show 60 Minutes (“The Virtuoso”) in 2014. Roberts is perhaps best known for his work integrating jazz and classical music styles through his ground-breaking arrangements of Gershwin’s Rhapsody in Blue and other orchestral works. He has received numerous prizes and awards, including commissioning awards from major symphony orchestras as well as from Jazz at Lincoln Center, Chamber Music America, and ASCAP, and also received the Helen Keller Award for Personal Achievement. His many recordings include solo piano, duets, and trio arrangements of jazz standards, original suites of music, large ensemble works, and symphony orchestra recordings on CD and DVD. Roberts has been on the forefront, fighting for the development and use of technology solutions for blind musicians.  Roberts is Associate Artistic Director of the Savannah Music Festival and an associate professor of music at Florida State University. He holds an honorary Doctor of Music degree from The Juilliard School.

KENNY LEON is a Tony Award winning Broadway and film director. His Broadway credits include the 2014 revival of A Raisin in the Sun starring Denzel Washington (Tony Award Winner for Best Direction of a Play and Best Revival), The Mountaintop starring Samuel L. Jackson and Angela Bassett, Stick Fly produced by Alicia Keys, August Wilson’s Fences (which garnered ten Tony nominations and won three Tony Awards including Best Revival), the 2004 revival of A Raisin in the Sun with Sean P. Diddy Combs, Gem of the Ocean, Radio Golf and the 2014 premiere of Holler if You Hear Me, a new musical created using the music of Tupac Shakur. Leon is the recipient of numerous awards including the 2010 Julia Hansen Award for Excellence in Directing by the Drama League of New York, and the 2017 Mr. Abbott Award bestowed by the SDC Foundation. Mr. Leon is the Artistic Director of  Kenny Leon’s True Colors Theatre in Atlanta, Georgia. Leon is a graduate of Clark Atlanta and is an honorary Ph.D. recipient of Clark Atlanta and Roosevelt Universities.  He is currently serving as the Denzel Washington Chair at Fordham University.

Next PostJASA Helping Seniors To Receive In-Home Care Through JASACare