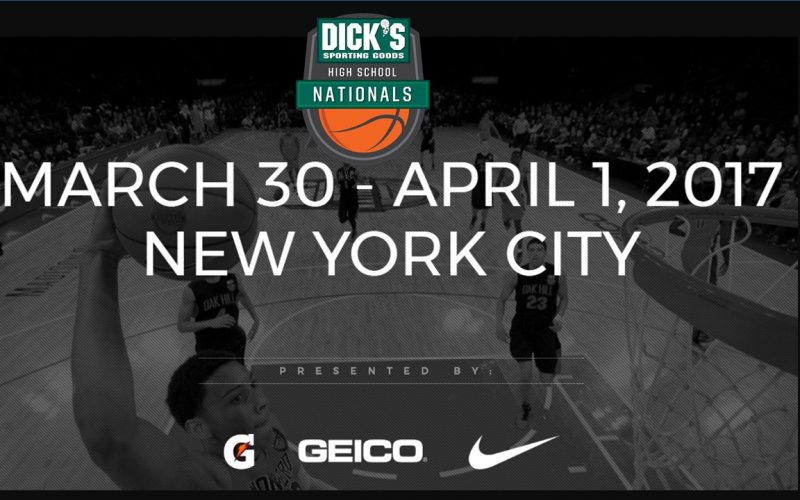 New York – March 16, 2017 – The DICK’S Sporting Goods High School Nationals returns to New York City for the fourth consecutive year, featuring the best high school basketball talent in the country. All eight of the boys teams selected to play in the ninth annual tournament are ranked in the top 20 of the USA Today Super 25 Expert Rankings, and all four of the girls teams are also ranked in the top 20. This year’s pool will include five state champions.

The three-day, single-elimination tournament begins Thursday, March 30, at noon with the boys quarterfinals on ESPNU, and continues on Friday, March 31, with the girls semifinals (11 a.m. & 1 p.m., ESPNU) and boys semifinals (3 p.m. & 5 p.m., ESPN2). The tournament culminates on Saturday, April 1, with the girls championship (10 a.m.,ESPN2) and the boys championship game (noon, ESPN).

Tickets are available now at dicksnationals.com. General admission tickets are $10 for adults and $5 for students.
While highlighting the nation’s top talent, this year’s tournament will also raise awareness around the financial crisis in youth sports. According to Up2Us Sports, billions of dollars have been cut from youth sports in recent years, and by 2020, 27 percent of U.S. public high schools may not have sports programs. DICK’S Sporting Goods and the DICK’S Sporting Goods Foundation have pledged more than $50 million to support teams and raise awareness of the issue.

To be eligible to be selected to the tournament, participating schools must be a four-year high school, independent or public, and have their respective governing body’s permission to participate. Tournament teams are chosen by a selection committee.

Go to dicksnationals.com for the list of participating teams.