Guggenheim Presents First Realization of Work from Series of Light, Space, and Sound Installations Conceived by Artist Doug Wheeler in the 1960s and ’70s 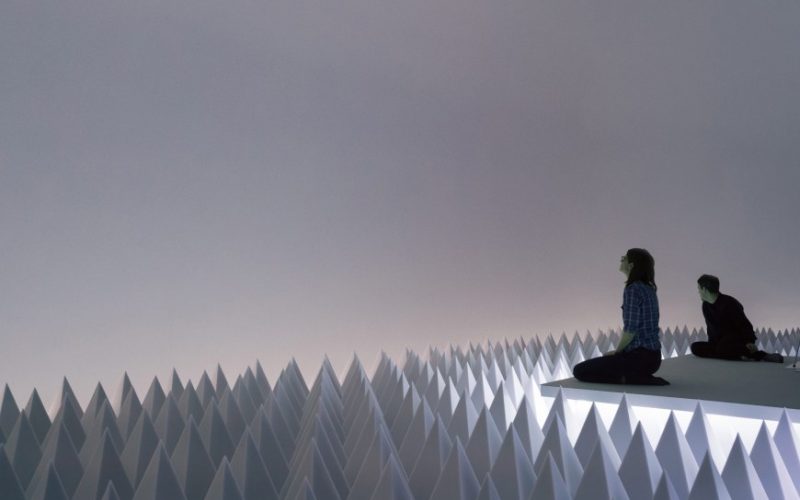 (NEW YORK, NY—March 23, 2017)—The Solomon R. Guggenheim Museum presents the first-ever realized work from a group of installations conceived by Doug Wheeler during the late 1960s and ’70s: Doug Wheeler: PSAD Synthetic Desert III, on view March 24–August 2, 2017. Produced in close collaboration with the artist, the Guggenheim installation is developed from drawings executed in 1968 and will be on view in the museum’s Tower Level 7. In addition to the architectural modification of an existing room to achieve an optical impression of empty space, which is a familiar element in other  other works by Wheeler, PSAD Synthetic Desert III is also a semi-anechoic chamber: a space designed to suppress all but the lowest levels of ambient sound. Into this profound silence other sound will then be introduced. The two elements—optical and acoustic—transform the museum gallery into a world apart. Wheeler compares the impact of the work to his own experience in the deserts of northern Arizona, where near-silent conditions  deeply influence the visual and felt sensation of space.

Doug Wheeler: PSAD Synthetic Desert III is organized by Jeffrey Weiss, Senior Curator, and Francesca Esmay, Conservator, Panza Collection, with Melanie Taylor, Director, Exhibition Design, Solomon R. Guggenheim Museum. To realize the artwork, the museum is working closely with Raj Patel and Joseph Digerness of Arup, a design firm that specializes in the acoustic properties of built space. The presentation is executed in conjunction with the Guggenheim’s Panza Collection Initiative, an ongoing study devoted to questions around fabrication and installation of Minimal, Post-Minimal, and Conceptual art.

Wheeler is most closely associated with the Light and Space movement of West Coast art. Since he abandoned painting in the mid-1960s, much of his work has been based on the optical dematerialization of the space of a gallery or museum room. Through a subtle application of the technology of light and  sound, he produces immersive spatial environments that heighten our understanding of perceptual experience.

For the Guggenheim installation of Synthetic Desert, being created more than 40 years after the work’s conception, the artist’s ambition is to produce a hermetic environment based on a radical reduction of optical and acoustical sensation. To protect the quality of visitor experience, which achieves its fullest potential only with as few extraneous sounds and distractions as possible, each visitation group for Synthetic Desert will be limited to five people. A timed ticket that allows visitors to spend either ten or twenty minutes in the gallery is required. Tickets are free with the cost of general museum admission and may be reserved online, or at the Admissions desk on a first-come-first-served basis for select time slots. Visitors with accessibility concerns should notify Guggenheim staff upon arriving at the museum. Ticketing information is posted at guggenheim.org/psad-synthetic-desert-iii-ticketing.

PSAD Synthetic Desert III entered the Guggenheim collection in 1992 along with many other Minimal, Post-Minimal, and Conceptual artworks from the 1960s and ’70s that were acquired from the collector Giuseppe Panza di Biumo. The realization of Synthetic Desert is intended to produce an authorized iteration of the work that can be re-created at the museum in the future.